Mohammad Rahmat worked at a bakery in Chakan, Pune along with his brother. The two were the sole earners of the family; Rahmat had been doing this for ten years now. The lockdown blocked access to the bakery, the owner could no longer afford to pay. The two concluded the decision to begin their journey back on foot. 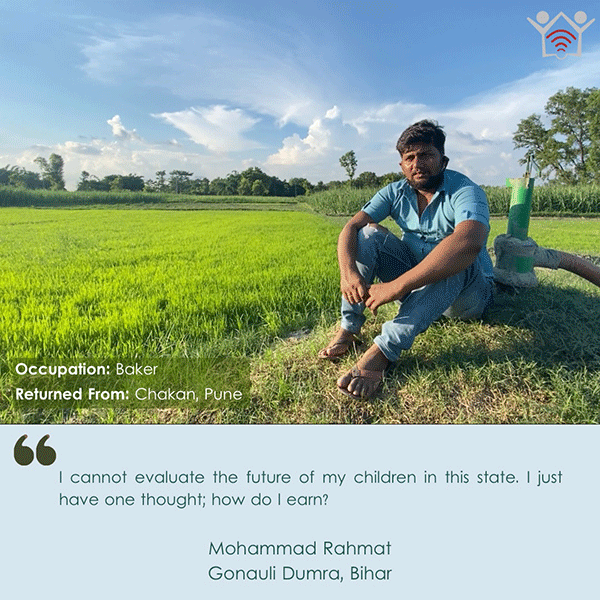 Interviewer: How was your first encounter with the virus? Share details about your journey.

Mohammad Rahmat: The owner of the bakery is Irshad Mohammad. At the beginning of the lockdown, he suggested we head home. Throughout my time there, he covered our rent (Rs. 3,000). I did feel bad. I could not blame him though, there was no cash-flow since the implementation of the lockdown.

We were aware of the threat of the virus, not its magnitude. People around me discussed it all the time, there were updates on Facebook, WhatsApp, and other social media applications. We had saved Rs. 4,000 in the last fifteen days of work.

At first, we walked 200 k.m. to a cycle store in Ahmednagar. Using left-over money, we purchased two bicycles. The police stopped us 400 k.m. later. We described our predicament, and he was able to give us a train ticket to Lucknow. He ensured to send the bicycles back home as they were the last of our assets, but he did not. From Lucknow — we boarded the government bus to Gorakhpur followed by another 200 k.m. walk to the outskirts of Bettiah.

Food was from whoever wished to help, and at times – the policemen too would offer. The only inconvenience we experienced was in Uttar Pradesh as the state authorities refused to provide any assistance. Unfortunately, there was no other route to take. We managed to take 2-hour breaks when the heat was intolerable. After the two-day long journey, my legs were swollen and I had a fever.

My parents urged us to isolate at the school that was converted into a quarantine centre. There were no funds to set-up necessary facilities according to the head of the village. A week had passed when the first fan in the room was installed. The food was dal and vegetables, rice; twice a day, chickpeas, and sweets for breakfast.

The provisions at the centre were not not sufficient for 15 – 20 people arriving from all around the country: Mumbai, Ludhiana, Delhi, and other urban cities. 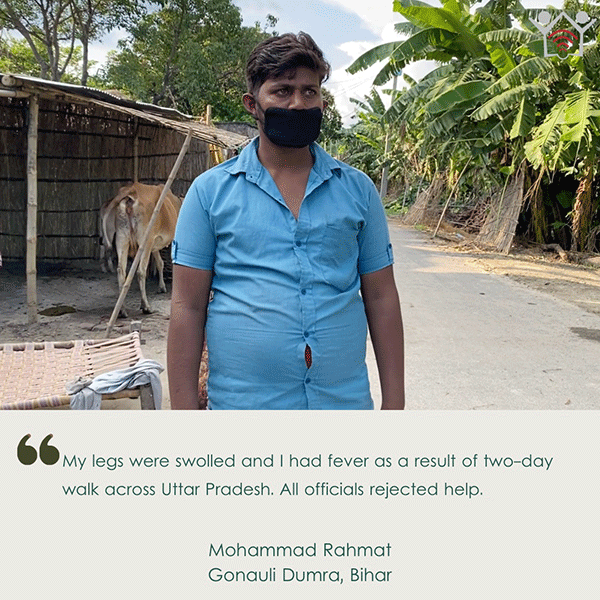 Interviewer: How has the lockdown impacted your life?

Mohammad Rahmat: I was able to earn Rs. 12,000 a month, and my brother contributed the same amount working at the same bakery. With my mother, wife, sister, grandmother, father, and two infants, we were able to send home Rs. 14,000. We kept our personal expenses at minimum spending only on; food, phone-bill, and other house expenses that summed to Rs. 8,000.

I have not earned any amount since arriving back in Gonauli Dumra, Bihar. I visited Lauria for work related to ‘gilo mati’ but failed to due to the scarcity of jobs. If Irshad(my employer) were to open the bakery again, I would accept the opportunity instantly.

My brother and I, the sole earners, are unemployed. There is nothing to fall back on. I have supported my father since the 1st-grade. He would earn Rs. 7,000 a month from labor work; the family expenses would cost Rs. 10,000. I had to drop-out.

I requested the chief for information regarding beneficial government schemes. He said, “go ask the Chief Minister.” The internet on my smartphone stopped working because I do not have the money to recharge. I cannot evaluate the future of my children in this state. I just have one thought; how do I earn?